The Rectified Linear Unit (Relu) will be beautifully dissected in this popst:

This is what you will be able to generate and understand by the end of this post. This is the evolution of a shallow Artificial Neural Network (ANN) with relu() activation functions while training. The goal is to fit the black curve, which means that the ANN is a regressor! The full code for this entire post is available on MLDawn’s GitHub.

Relu is a desceptively simple Activation Function that is commonly used to introduce non-linearity into Artificial Neural Networks. Funny enough, this simple function can do a ton of cool stuff. In this post, we will understand the flexibility of Relu, its derivation, as well as, its derivative. We will also, write up some code to see the evolution of a collection of Relu functions, second by second, as they strive to fit curves. In this post you will learn the following:

I am ready when you are 😉

We have previously discussed Artificial Neural Networks (ANNs) and even gone through the details of Gradient Descent (Part-1 and Part-2 are available). Today it is time to dive more into the details of ANNs and study one of the most common activation functions ever invented, that is Relu.

Relu stands for Rectified Linear Unit and it is a popular activation function that is used in ANNs prevalently. It has certain advantages that its predecessors, Sigmoid (used during the early 1990s) and Tanh (used later in 1990s and through the 2000s), lack.

We can plot it to have a better visual understanding of it. Let’s use Python and matplotlib to do this. First, let’s import the necessary packages:

And now let’s define the relu(z) function in Python:

Now let’s plot relu(). This code will do it:

Whose output is the mighty relu function: 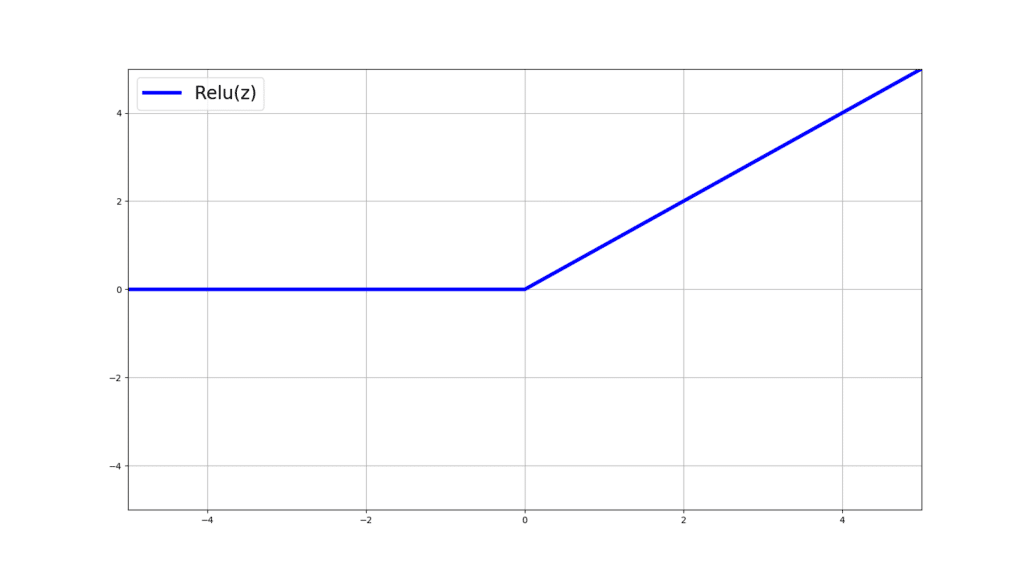 I agree! It seems far less fancy than Sigmoid or Tanh but believe me, this desceptively simple function has a lot to offer and is far more flexible than it looks. In the next section we will understand the derivative of relu.

Understanding the Derivative of Relu

As you may have noticed, relu(z) is differentiable in all of its domain except when z=0. In other words, the left and right derivatives at z=0 exist BUT are not equal (i.e., at z=0, relu(z) is not differentiable). Then how is that it can be used in gradient-based learning methods such as in Artificial Neural Networks (ANNs)? During computing the gradients, what happens if we hit z=0? Would gradient descent and back-propagation simply fail?

The derivalive of relue(z) can be studied in 3 regions of its domin, namely, when z>0, z<0, and z=0. Let’s see the value of the gradients for the first two cases first:

This is easy to follow, right? Well, for all positive values of z, the slope of the tangent line is going to be 1. Similarly, for all z<0, this slope is 0. Now what about when z=0? Well relu(z) is not differentiable at z=0:

The left derivative of relu(z) w.r.t z is 0 and the right derivative is 1. However, since they are not equal, then relu(z) at z=0 does not exist! This effectively means that, the rate of change of relu(z) w.r.t z, at z=0, is different depending on whether you are getting infitely close to z=0 from its left side, or its right side (take a moment to absorbe this 😉 if that doesn’t make sense).

So, whet do we do? We do know that if we use relu(z) in training an ANN, we need to make sure that we can compute its derivative for all possible values of z! Here are a few ways to think about this problem:

I don’t like thinking about the gradient of relu(z) at z=0 as just a random and arbitraty value. Let’s use the idea of sub-gradients and plot infinite number of lines, touching relu(z) at z=0! Effectively, we will have infinite number of slopes ranging from 0 all the way to 1, since we start from a horizontal line with a slope of 0 and end up with the final line which will land on relu(z) itself, and will have a slope of 1. You can think of g as a uniform random variable representing the slopes of these lines:

These slopes are called the sub-gradients of relu(z) at z=0. 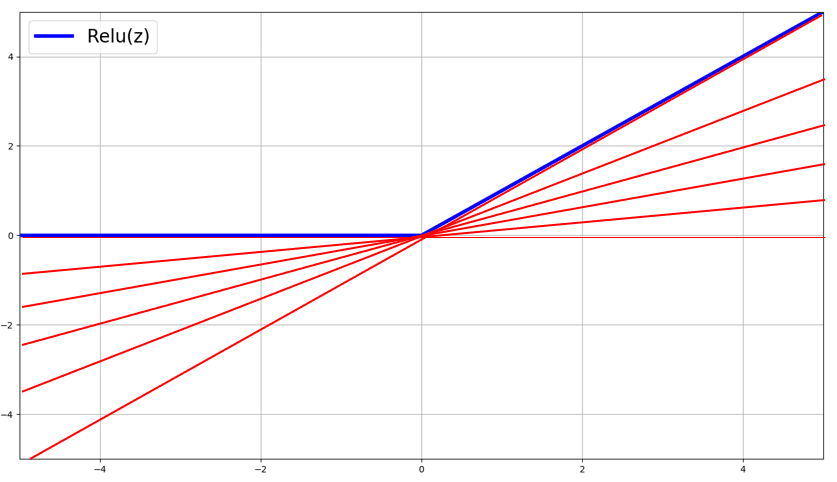 The slopes of these red lines, g, are the sub-gradients of relu(z) at z=0, where g is uniformly distributed! We know that for a given random variable g, with a certain probability distribution p(g) in the interval [a,b] the expectation is equal to:

And when g is uniformly distributed in the interval [a, b], p(g) must be:

So that the area under the curve would be exactly equal to 1. More specifically, this is a rectangular area, whose length is equal to

and whose width is

. And clearly, the area of this rectangel is 1:

Otherwise, p(g) cannot be a probability distribution! In our case, the range [a,b] is equal to [0,1], as this is the range of possible values for the slopes of these sub-gradients.

Now, back to computing the expectation of these bloody sub-gradients (i.e., slopes of infite number of those red lines at z=0) represented by g:

So, the expected value of the sub-gradient over infinitie number of sub-gradients is 0.5! I know! We ended up with the mid-point in the range [0,1]. However, I am more convinced by the “Expectation” arguement than I am with the “mid-point” arguement. So, this means that when z=0 (as rare as it is), define the candidate sub-gradient to be:

Moral of the story: You can choose any value in the range [0,1] and your ANN will still train. However, I like my expectation arguement as it lays a consistent arguement rather than just picking a random value!

ANNs manipulate relu(z) during their training in all sorts of way. Let’s see how flexible can relu(z) get, given simple mathematical manipulations. By simple manipulations of relu(z), you can flip, rotate, or shift the relu(z) function: 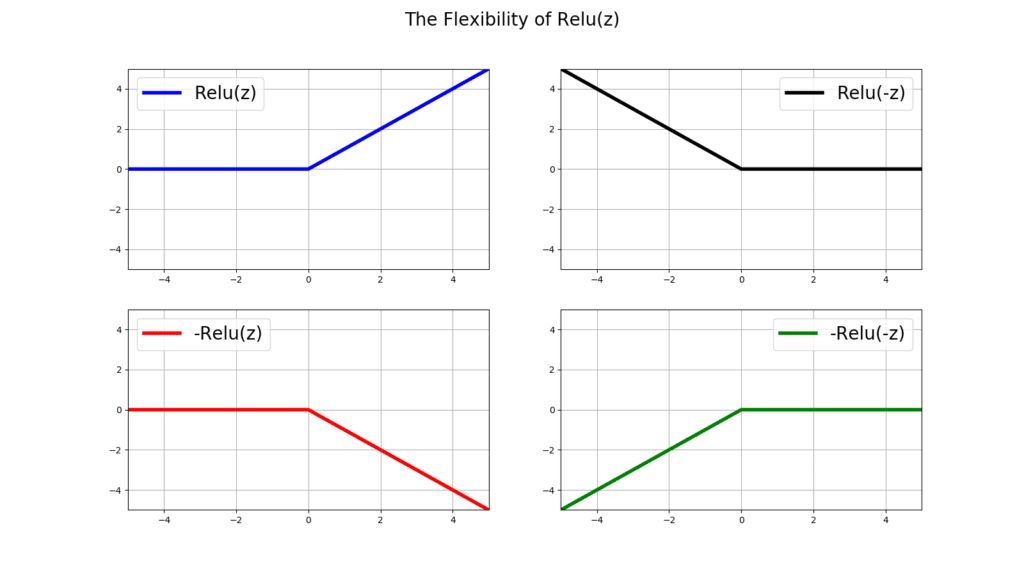 You can also change the slope of relu(z), by multiplying z by a weight w:

Hell you can even move the bloody thing horizentally using a bias term b in the form of relu(z + b): 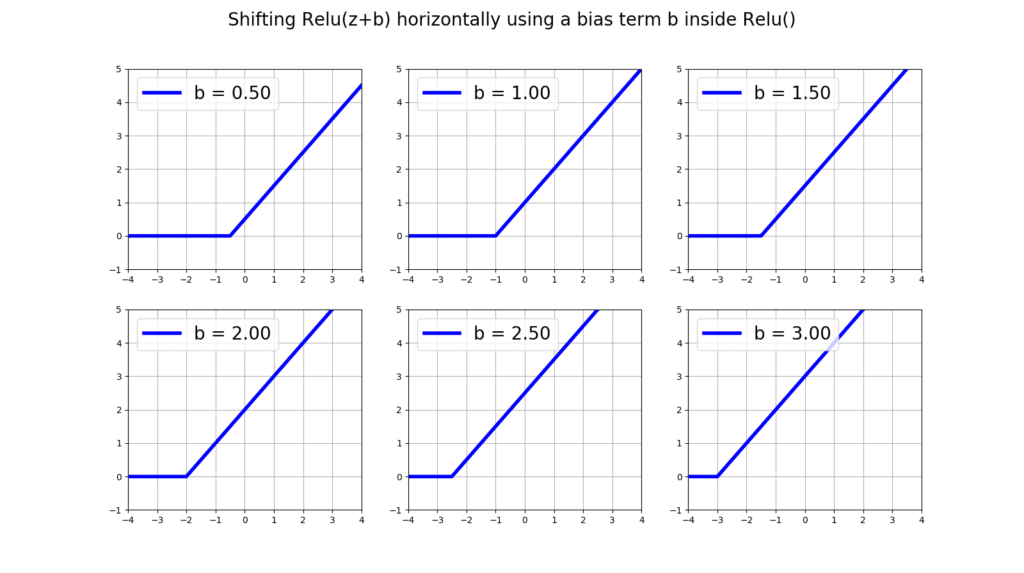 Or vertically using a bias term ourside relu(z) in the form of relu(z) + b: 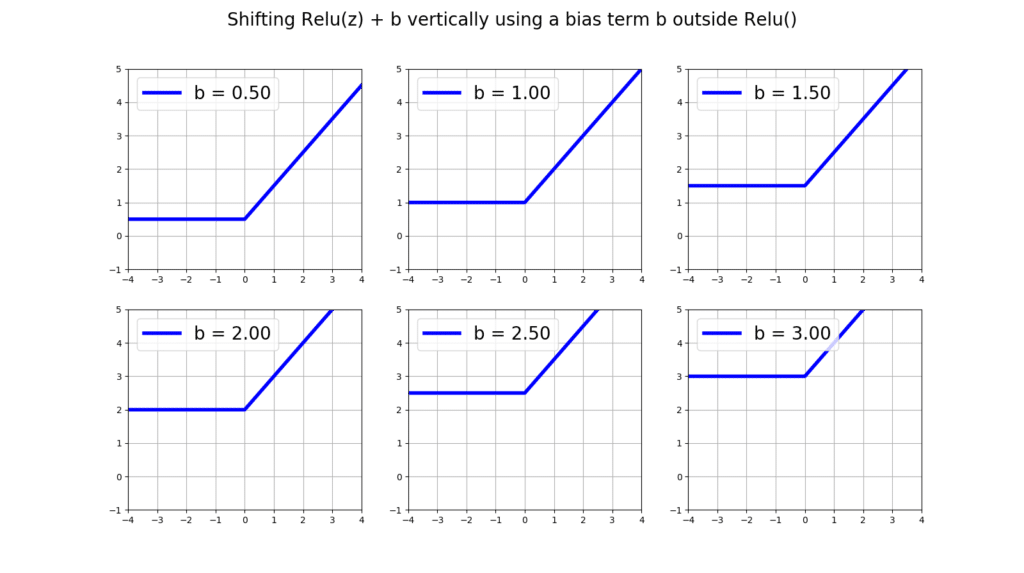 Now, let’s see how an Artificial Neural Network (ANN) can use all of this flexibility to give us the non-linearity that relu() has been boasting about all these years.

. Simiarly, let’s call all the weights conecting the hidden layer to the output node as

and the bias unit connectting to to the output node with 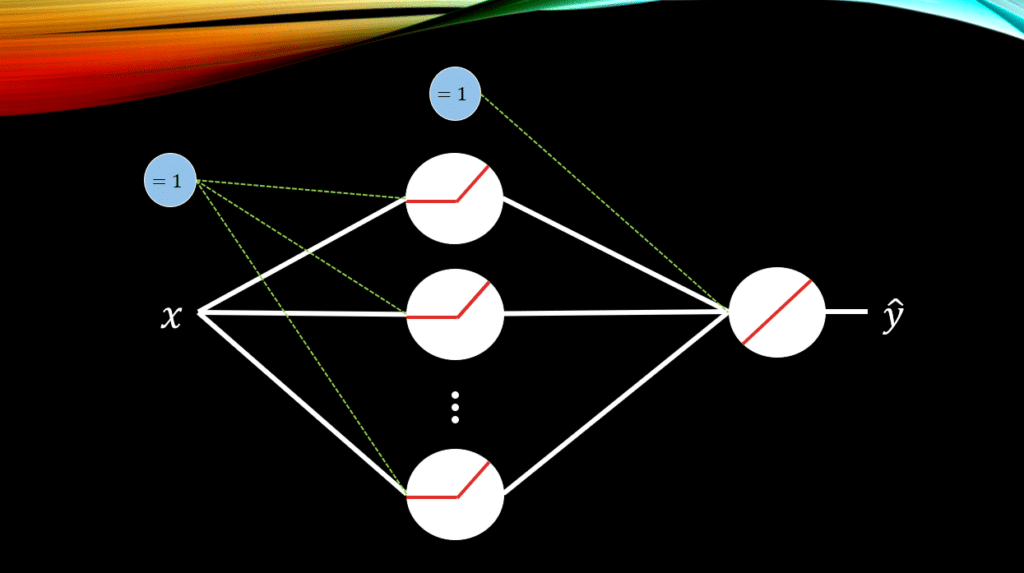 So, let’s get comfortable with the math. The activations at the hidden layer for each relu() is:

The final output of the model is then (Remember: The output neuron has a purely LINEAR activation function):

Now let’s code up a regressor using Pytorch, which can receive a desirable number of relu() neurons in its hidden layer, as an arguement. But first, let’s look at the curve that we would like the ANN learn to fit: 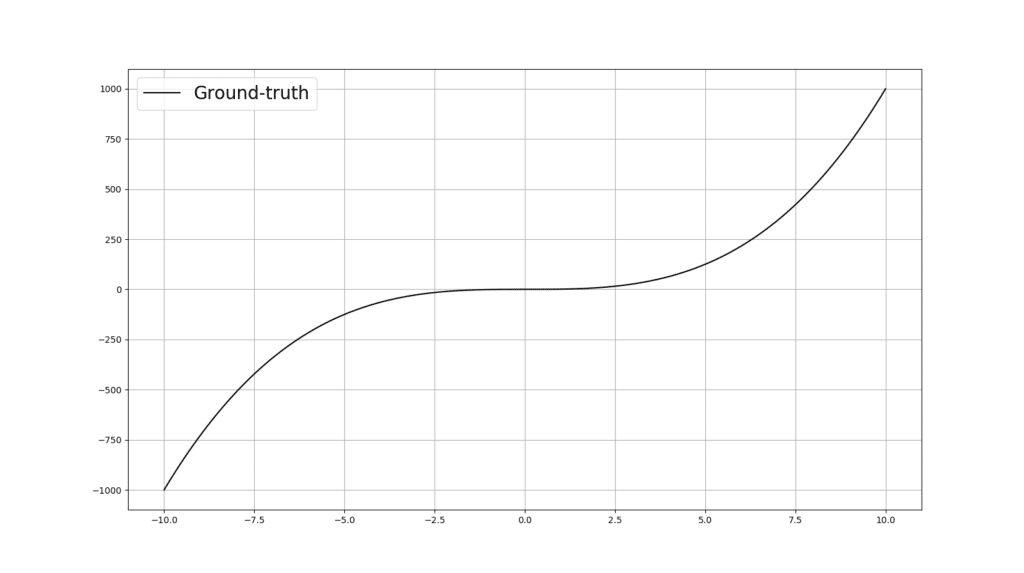 Now, let’s define the device on which we would like to put our data and our ANN model. This can be either the CPU or the GPU. This code, will try to assign GPU as our device, if not posible, then inevitably we are stuck with the CPU:

Now let’s create an object of the regressor class and setup some initial stuff for the training to take place:

The following animation will pop out, where you can nicely track the evolution of these amazing relu()’s:

Appearances can be desceptive! Relu() is a very strong activation function which can bring us non-liniarity, and it does not have the issues that its predecesors, Sigmoid() and tanh() had. Namely with relu you can enjoy its properties: 1) No saturation 2) No vanishing gradient 3) Non-liniarity.

On behalf of MLDawn, Mind yourself 😉