In our last post, we talked about the more-general-than-or-equal-to operation, which we denoted with ≥g and we said that in order for hypothesis hj to be considered more general than or equal to hypothesis hk, the following has to hold: 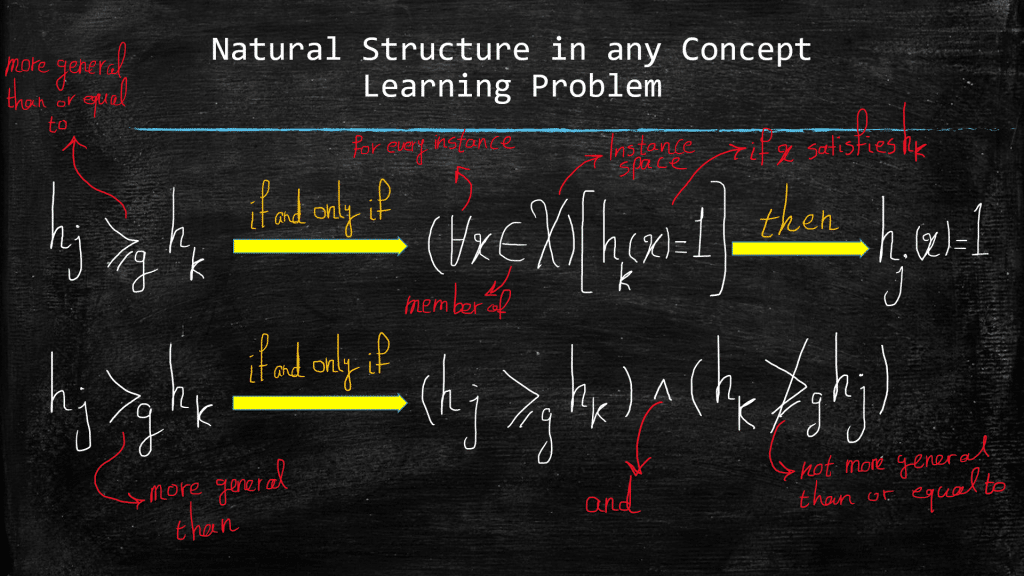 Today, we will talk about a famous algorithm that can be used to explore the hypothesis space, H, by leveraging the ≥g operation to its advantage. The name of this algorithm is: Finding-S, where S stands for specific, and hints that the goal is to find the most specific hypothesis. Below we dig deeper to understand this interesting, but not perfect, algorithm!

Find-S: Finding the Most Specific Hypothesis

So, how can the more-general-than-or-equal-to operation help us improve our search in the hypothesis space H? The Find-S algorithm suggests that we could start with the most specific hypothesis, and then progressively generalize it every time it fails to correctly classify a positive example in our training set. We do this generalization to ameliorate this failure! Remember that an example x is classified as positive by hypothesis h, if and only if:

Below, you can see steps of the Find-S algorithm: 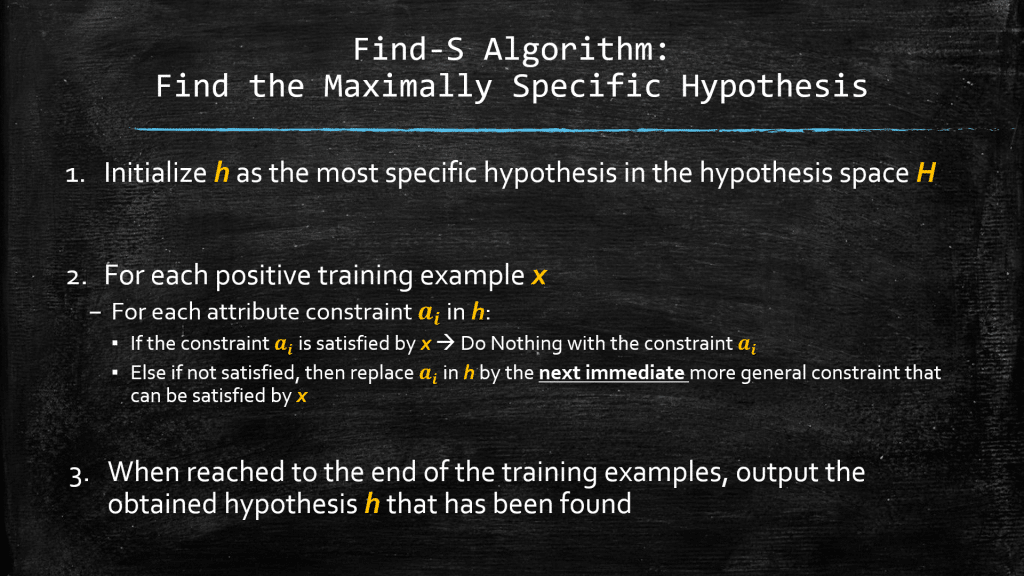 Every algorithm can be explained better through a practical example, yes? First take a look at the table of training examples below: 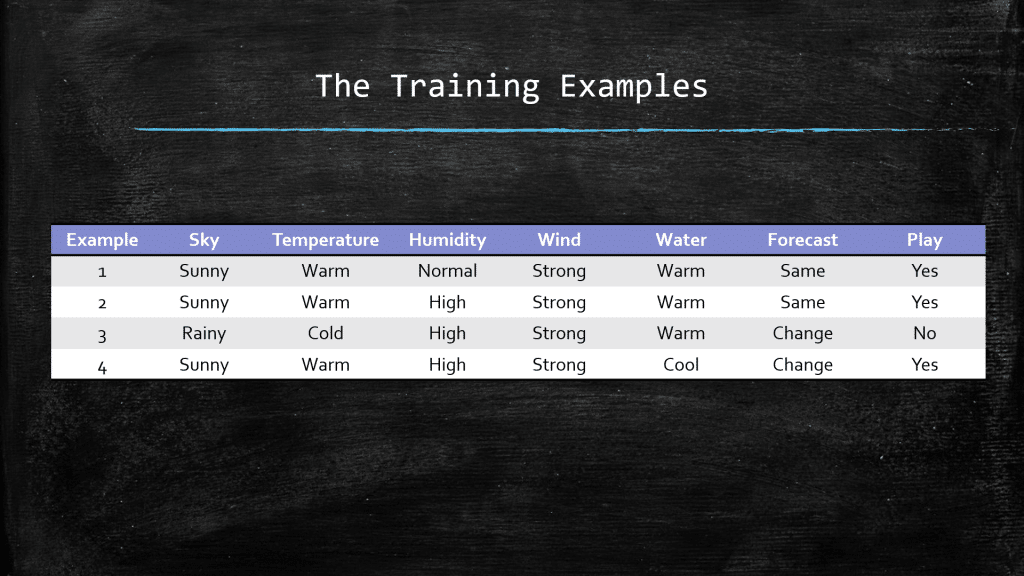 Remember that we want to learn the concept of play so we can understand what is the playing habit of Joe. Meaning in what type of a day would he play golf?! all we have at hand is the limited and yet valuable set of training examples (A small set of the instance space: All possible days!). Let’s follow the algorithm:

and we can see that there is only 1 value in x2 that prevents x2 from satisfying our current hypothesis h, and that is the value for the attribute “Humidity”! Our most updated hypothesis h, requires that the “Humidity” level be “Normal” whereas in x2 , it is High. However, all the other attribute values in x2 can satisfy their corresponding constraints in h. So, we need to do something with the current constraints on “Humidity” in h. The constraints on “Humidity” was Ø at first, then we had to change it to “Normal” to adapt to our first observed training example x1. And now, x2 has the value “high” for “Humidity”!

Upon seeing the third training example, which happens to be a negative example, the Find-S algorithm simply ignores it and makes no change to the currently found hypothesis. However, notice that h is already classifying this negative example x3 as negative (i.e., h(x3) = 0), meaning that x3 fails to satisfy h, so no change on h is needed!

IMPORTANT: Note that at any stage of our search in Find-S algorithm, the obtained hypothesis h, is the most specific hypothesis that is consistent with the observed positive example. Remember that we are seeking the hidden desired hypothesis c in the hypothesis space, and we know that c is definitely, 100%, consistent with the positive training examples, so target hypothesis c (i.e., the target concept) is for sure more-general-than-or-equal-to h. Remember that the target concept c will never cover the negative examples (i.e., negative examples cannot satisfy c), so since we just established that:

Then those negative examples cannot satisfy h either, as we know that c encompasses h. Finally, upon arrival of the fourth example x4:

We can see that the last 2 values “Cool” and “Change” fail to satisfy our current h! So, h needs to evolve to the next more general hypothesis that is:

So, we mean that the next general constraint after Ø is a specific value, and after that we resort to ? which says anything goes. Note that the jump from a specific value to ? is quite aggressive and makes a huge generalization but then again these 3 constraint types are just there to smooth out the bits and pieces and implementation of the Find-S algorithm. The Find-S algorithm has nothing to do with our defined constraints and these constraints have been defined just to convey the big picture about meaning of a more general / more specific hypothesis, and that’s all.

In the next post we will focus a little bit more on this algorithm and talk about some of the issues with it.

Until then, take care! (ML-Dawn)